An interview with Leonardo Parisi where he talks about his work

WINE IN AMPHORA: THE ARTISANS OF WINEMAKING TELL THEIR STORIES 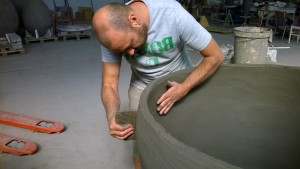 With the return of wine in amphora, Art and Wine Culture come together to create a product of great charm and history. Alongside the wisdom of the winemakers who follow the steps of the fermentation and ageing of wines in terracotta, there is another primordial wisdom at the base of this ancient practice now come back into fashion: the work of the master craftsmen of terracotta. Leonardo Parisi, the first producer of wine jars in Italy, with his workshop Artenova  in Impruneta, has gone from creating objects, bottles and decorations in terracotta to making amphorae for wine, entirely by hand.

Leonardo Parisi: “We had heard about the Georgian wine amphorae and we wondered if it would be possible to do something similar with the clay of Impruneta. From there we began to experiment with the help of a friend, Sergio Bettini, and winemaker Francesco Bartoletti. The experiment brought interesting results, so we decided to start a production of wine jars and began by proposing them to a few wine producing companies”.

Since you began producing amphorae for wine, has the landscape among your customers changed?

LP: “Since we started production, demands have increased. More and more companies are intrigued by this new method of containing wine. The good returns, via word of mouth and the internet, have resulted in a wide distribution of the jars, not only in Italy but also abroad. In fact, we sell more abroad than in Italy. We decided to produce different models inspired by History. We have started the production of the Dolium (an ancient terracotta vessel used by the Romans) and Eggs inspired by those in concrete produced in France”.

Which countries produce the most wine in amphorae?

LP: “Not many, although I know that some people after hearing of our success are getting organized. The history of terracotta amphorae for oenological use is mainly Georgian, then Spanish”.

From producer to consumer, Leonardo, what do you like to drink?

L.P .: “It ‘difficult to give a classification. I mention Francesco Cirelli who with his Montepulciano d’Abruzzo aged in terracotta is having a lot of success in Italy and abroad. Since I have been producing wine jars I appreciate most and have learned to drink natural wines (organic or biodynamic). I’m much less keen on wines with a lot of tannin in them”.

A unique wine flows from the jars that Artenova craft by hand using an ancient technique updated with wisdom over time, creating a product that is both Artistic and functional. Together with the Art of Terracotta, the binomial Wine and Culture is becoming richer with new realities to discover.

Do you think that Wine and Art are a perfect union?