In the winery of elena fucci in Basilicata, the aglianico wine of vulture is made in artenova amphorae 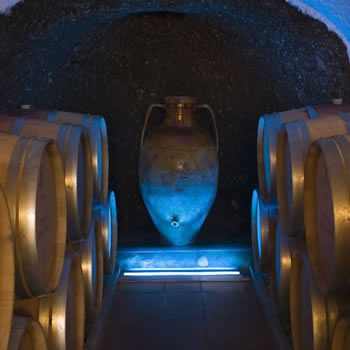 A story that begins with a great passion and a bond with the place where she was born and raised. Since she was a child, Elena Fucci lived and played in the vineyard in Contrada Solagna del Titolo at the foot of Monte Vulture, which her grandfather used to tend to like a garden. The idea of ​​severing this bond was unbearable to her so she decided to specialize in Oenology, changing her original studies and life plans to invest in those vineyards, some of which are about 70 years old, among the oldest in the Vulture area. In 2000, the Elena Fucci estate and winery were founded in the province of Potenza (Basilicata). The area is inland and mountainous, about 600metres above sea level with strongly mineral, dark coloured volcanic soil.

Elena says: “The choice from the start, without any regrets, was to bet everything on a single label; “TITOLO”, imagining right from the start as a Class A wine, (what the French call crù). A single wine dictated by objective reasons linked to the yield of the vineyards and the quality of the grapes given by the maturity of the vines; a single wine to best represent the specificity of Aglianico and the territoriality of Vulture which gives this grape variety a unique expression; a mix of microclimate and terroir that in Contrada Solagna del Titolo offers one of the best possible expressions. One of the greatest compliments that has been addressed to “TITOLO” is that its attributes are recognisable alongside those of all the other “Aglianico di Volture in purity” wines, recognition that is precisely founded on the fact that it represents precisely the territory from which it originates “.

Today there are 6 hectares of vineyards, the grapes of which were first sold to third parties, then in 2004 at the same time as Elena’s degree in Viticulture and Oenology, the company began its own production with 1200 bottles: The production grew over the years to reach the current number of 30,000 bottles. 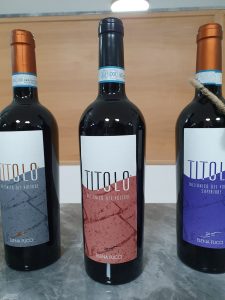 TITOLO’s success expanded to the collaboration with Artenova, owned by Andrea and Leonardo Parisi in Impruneta, Tuscany (pictured here is Leonardo Parisi visiting Elena Fucci last December). Now, part of the harvest is made and aged in terracotta jars. The final product is “TITOLO 2017 by Amphora”, a red wine of intense ruby ​​colour with a lasting and decisive perfume, both aromatic and spicy.

The fermentation of the grapes with almost whole berries takes place in amphora at a controlled temperature. The subsequent racking also takes place in terracotta.

Here’s the technical sheet of the wine:

Refinement: 18 months in a 700 lt amphora of untreated terracotta, further refinement of 6 months in the bottle.

Vinification: Selection of the grapes, destemming of almost whole berries, fermentation in untreated terracotta amphorae from Impurenta (Florence), at a controlled temperature with maceration on the skins for the entire time of alcoholic fermentation (12-13 days) with continuous délestages and pumping over. Subsequent racking, malolactic fermentation continued in terracotta.