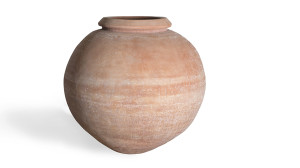 The dolium was a huge earthenware container, either spherical or slightly ovoid in shape, perhaps one of the largest objects in clay used in ancient Rome for the storage of wine and other alimentary products. They could reach over 1.50 metres in height and contain from about 1000 to 2000 litres of wine.
According to many archaeologists, the dolia (plural for dolium) were predominantly used buried in the ground for processing and storing wine and as containers for other food products. They were often made by specialised itinerant potters who journeyed from one region to another using local brickworks for their temporary workshops. The dolia were to be found in food-producing places such as farms or in commercial venues like shops and taverns. It is also true that the dolia, for their particular acoustic qualities, were often present in theatres to produce special sound effects!
There is documented evidence that the dolia were sometimes used as containers for transport by sea. They were fixed in the centre of the boat, while the remaining free space in the stern and bow was packed with the smaller amphorae. However this transport system, despite theoretically having great potential, was not a great success. The smaller amphorae were preferred, being found to be far more practical and safe.
Artenova has built a large dolium of more than 1000 litres for the fermentation and maturation of grapes, copying an original dolium from an important archaeological museum.