It has been an autumn of great satisfaction for the wine-producing clients of Artenova, especially regarding their wines aged in our terracotta Amphorae. Two awards in particular, have been given to these wine producers who represent Italy from north to south namely: specific recognition on the part of  “Slow Wine” and write-ups in the prestigious wine guide of Italy “Vini d’Italia 2016” by “L’Espresso”, one of Italy’s foremost magazines.

The following producers have been included in the wine guide of l’Espresso:

“I Cacciagalli” and “Tenuta Casadei” were commended for their wines aged in amphora. 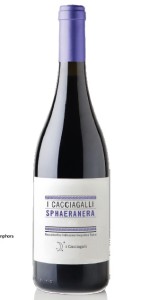 I Cacciagalli for “Sphaeranera 2013” which was present among the “Vini d’Ecellenza” (wines of Excellence) with a score of 18/20 and Syrah with a score of 15.5/20) both from their collection of wines made in terracotta: “Anfore 2014”.

Castello del Trebbio, also produced by Casadei on their estate in Pontassieve, Tuscany, were awarded “3 glasses” by the guide “Gambero Rosso” for their “Chianti Rufina Riserva Lastricato 2011”.

Furthermore in the guidebook  “I Vini d’Italia 2016” (wines of Italy) by Espresso, the vintage 2014 “Aorivola” produced by I Cacciagalli, was declared the best Falanghina in Italy.

For the first time this year the producers Francesco Cirelli from Atri, Abruzzo, made their appearance in The Slow Wine Guide 2016. They were awarded a “Chiocciola” (meaning “snail”: the symbol of slow food and wine) this prestigious awarded is given to wines considered “good clean and fair”. They also attained the recognition of Slow Wine for their Montepulciano d ‘Abruzzo in Amphora 2014, a great traditional wine of Abruzzo aged in Artenova wine-jars.