The history of wine jars from ancient Egypt to spanish Tinajas. Excerpt from the Conference Proceedings of “Terracotta and Wine 2014”

Wine jars as we know them today have a history whose roots go back to the second millennium BC: Wine jars for transport and trade were already known in ancient Egypt in the Early Archaic period of Thinis. A talk on the use of terracotta for the transportation and making of wine, from Roman amphorae to Spanish tinajas, was given by Professor Christophe Caillaud, director of the Gallo-Roman Museum in Vienne, France, during the conference “Terracotta and Wine 2014” organized in November 2014 by Artenova. The details of his speech are now posted on our site, included in the Conference Proceedings of the event. It consists of a sizable documentation tracing the findings of amphorae from ancient times to the present day, concluding in the experience of Artenova in Tuscany. Professor Caillaud in his address refers to it as “A nouvel élan en Italie”, “A new beginning in Italy: Artenova”. 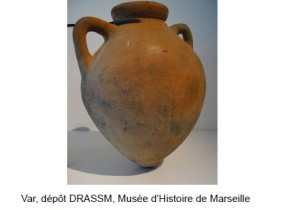 From Egyptian amphorae to the Athenian black-figure amphorae from the Iron Age to the amphorae of the Italian peninsula of which an artefact of 500 BC (shown in the photo), can be found in the History Museum of Marseille.

In the picture below we see a cargo of Italian amphorae dating back to ancient times recovered from the seabed by scuba-diving archaeologists. 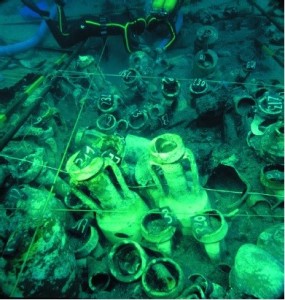 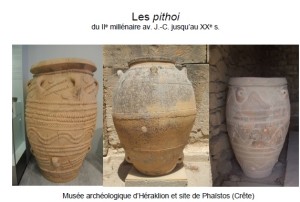 Pictures of pithos (large Greek storage vessels) alternate with those of amphorae. The latter used for the transport and storage of various liquids but especially wine, supplemented the larger vessels called pithoi which had a capacity of up to two and a half tons. 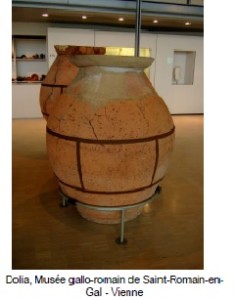 We have to wait until the Roman era to talk about Dolia (plural of Dolium), huge earthenware containers used for transporting wine. Various examples of dolia are now preserved at the Gallo-Roman Museum of Saint Romain en Gal in Vienne, France. Last year the museum commissioned Artenova to make a replacement copy of one of these dolia which stood in their outdoor park enabling them to bring the original inside for better preservation. Entire cellars containing Dolia were found in Pompeii, used for the storage of all kinds of foodstuffs such as flour, cheese and of course wine.

Barrels arrived on the scene for the first time in the first century BC. It is assumed that area of ​​origin was then known as Rezia, corresponding to the geographical area of ​​Central Europe. 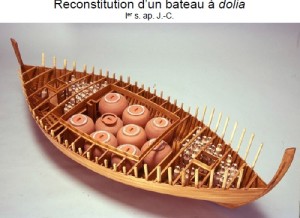 Exhibited in the Proceedings of the Conference is also an image of a model boat transporting dolia showing the way they would have been fixed in the middle of the boat stabilizing it with their enormous weight and girth, while the remaining free space in the stern and bow would have been filled up with the smaller amphorae.