WINE, AMPHORAE AND ARCHAEOLOGY. THE THREAD FROM THE PAST THAT LINKS ANCIENT SITES TO MODERN WINE PRODUCERS

There is an ancestral link between wine, amphorae and archaeology, but nowhere is it more striking than when ancient archaeological sites where wine was once produced, are found in places where it is produced still, a thread from the past and a remarkable coincidence. (see the conference “Wine in amphora between archaeological research and production” organized with the Accademia dei Georgofili in Florence and the Proceedings of the Conference of past editions of “Terracotta and Wine“). However, it is not so unusual to find modern day wine producers who have by casual chance set up their wineries close to ancient repositories of the history of oenology and viticulture. We give you three examples of extraordinary coincidences where modern “pioneers” of Amphora Wine have given new life to ancient vineyards and ancient winemaking  practices. 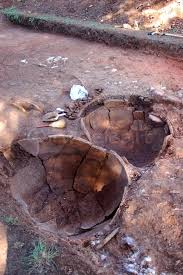 On the Island of Elba, Tuscan archipelago, near the town of San Giovanni on the coast of the Portoferraio harbor, excavations carried out by the University of Siena in 2011, with the support of the Fondazione Isola D’ Elba, have brought to light a 2000-year-old Roman villa, including immense Dolia wine-jars half buried underground. These huge vessels that can each contain more than a thousand litres are currently produced by Artenova in their Impruneta workshop on the model of an archaic dolium. On the island there is an “heir” to those Roman winemakers, Antonio Arrighi. His farm, Agricola Arrighi, is located only a few kilometres away from the archaeological site. Consequently, his wines are inspired by the finds. In 2010 Arrighi had already chosen to make wine in Artenova wine-jars.

For a targeted reading on the excavations at Villa San Giovanni, read “The wine of the Romans, between landscape, technology and taste” by Franco Cambi (page 39, Proceedings of the 2018 Conference).

In amphora, Arrighi produces the white wine Hermia I.G.T, from Viognier grapes, inspired by the name of a Cellar-slave of 2100 years ago found on a terracotta tablet (in photo), revealed by the excavations at Villa San Giovanni, Portoferraio; the red wine Tresse I.G.T., obtained from Syrah, Sagrantino and Sangiovese grapes; the white Valerius made with native Ansonica grapes (the Valerii were the owners of the aforementioned Roman villa). “(…) Obtained with a long maceration of the grapes in amphorae produced by Artenova in Impruneta … .. – says Arrighi – a wine made the same way it was done centuries and centuries ago (…) after all, since the times of Magna Graecia, man has used terracotta for the storage and transport of wine (…) 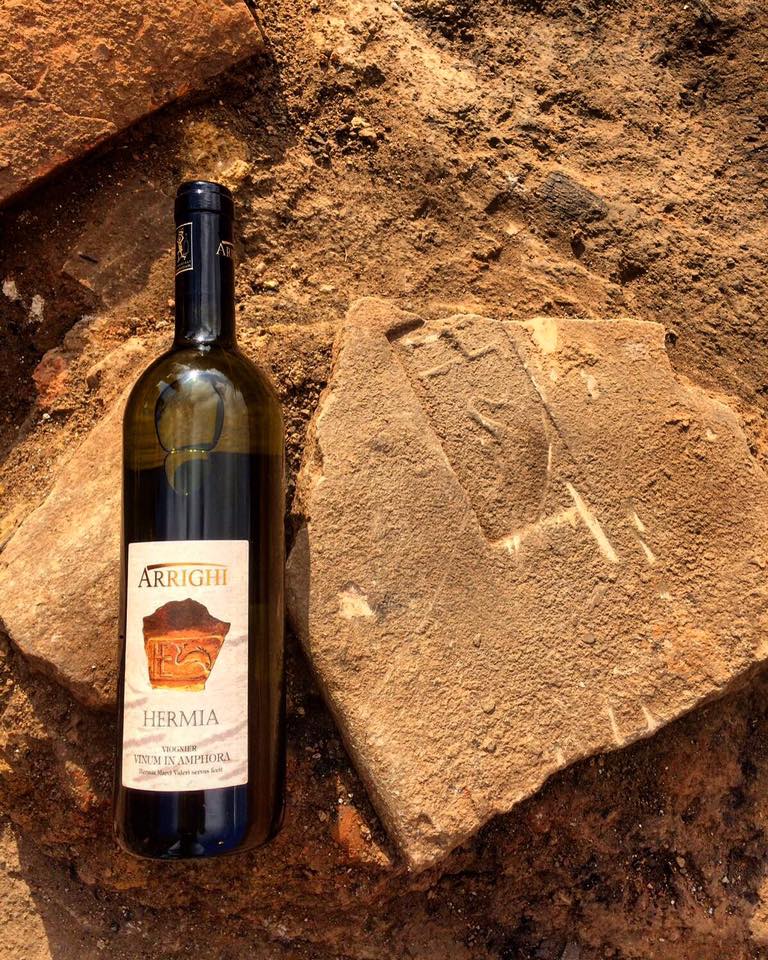 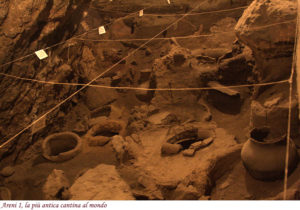 Areni 1 Cave, the oldest winery in the world, Armenia

From Italy to Armenia. In 2007 the oldest winery in the world, “Areni 1 Cave”, was unearthed in the Voyots Dzor region. Dating back to 6000 years ago, Areni 1 is located in the most important wine-growing area of Armenia and right in front of the winery and vineyard of “Zorah Wines” Zorick Gharibian the owner, has been guest of the biennial Amphora Wine event “Terracotta and Wine” since the very first edition. The location of his winery (Areni 1 is practically on his doorstep) is purely coincidental, as the discovery of the archaeological site took place many years after Zorah Wines had already began planting vineyards with indigenous Armenian grapes and reintroducing the use of amphorae, like the ones found in Areni 1, in Armenia called Karasi. This entrepreneurial choice has given birth to wines such as Zorah-Kerasi (pictured) and Zorah-Yeraz, two reds made with Areni Noir grapes native to the Vayots Dzor region, from a two-hundred-year old vine. 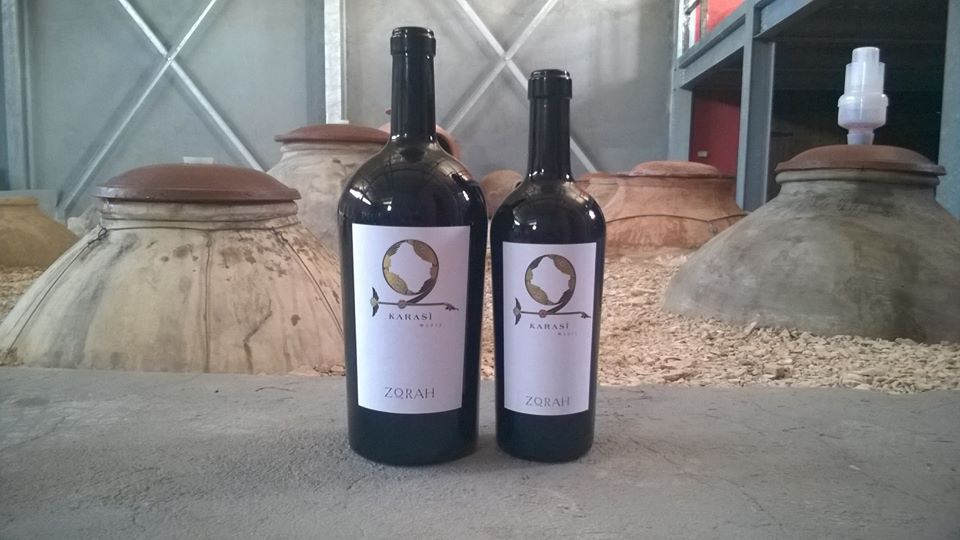 Zorah-Kerasi (pictured) and Zorah-Yeraz are two red wines made from Areni Noir grapes from a 200-year-old vine, native to the Vayots Dzor region. 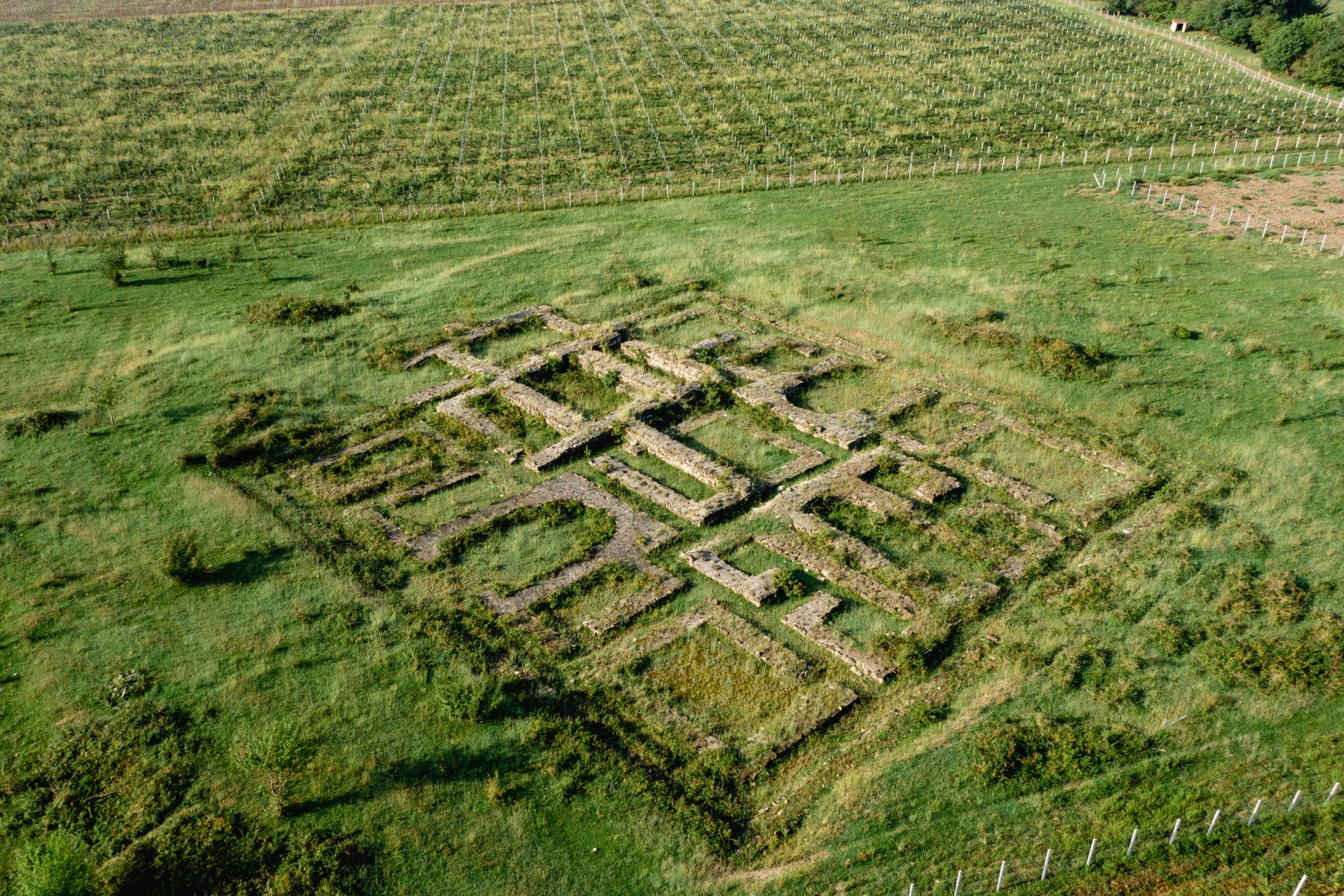 The Fire Temple of Nekresi, Kakheti, Georgia, near the Eclipse vineyards

The tradition of making wine in amphorae buried underground called qvevri, is native to every region of Georgia, an unbroken tradition dating back thousands of years. Kakheti is considered the leading region for qvevri wine and also the largest and most important for Georgian viticulture in general. The Nekresi Fire Temple is located in the Municipality of Kakheti, Kvareli, near the Nekresi Monastery. The Eclipse LLD Winery, situated in the beautiful lands of Appellation PDO in the heart of Kakheti, became a client of Artenova in 2020. After purchasing their land, they discovered that one of their plots was adjacent to the foundations of the Fire temple. This sacred place was built in 40 AD. and was dedicated to the solar eclipse that occurred in 19 AD. The Nekresi Monastery, one of the most famous and evocative complexes in Georgia, is right next to the Temple. “Our vineyards – says Eclipse – are planted 25 meters away from the remains of the Fire Temple. We at Eclipse believe that it is a bit of luck, a bit of coincidence and a bit of destiny to have chosen the name of the company before knowing the events that occurred in our area. We are proud to continue the legacy of spreading history around the world through our wine”.