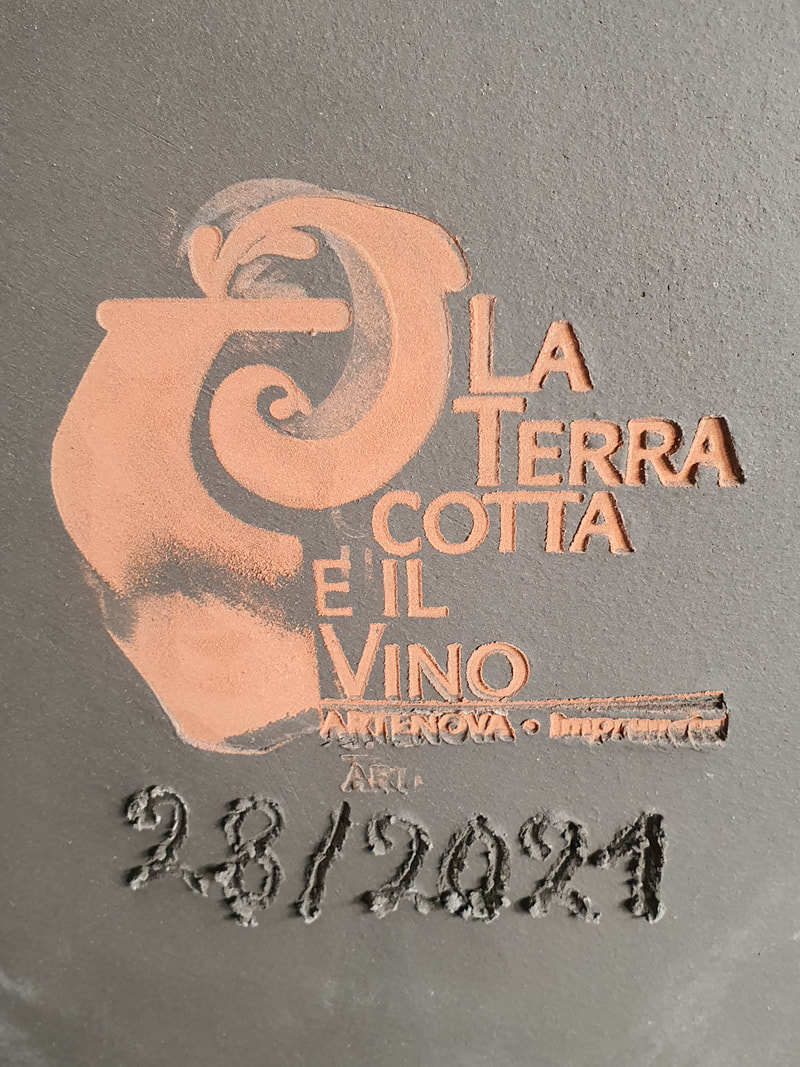 It was a happy intuition and today Artenova exports its amphorae as far as the United States and South Africa (…)”.
Food and wine journalist Patrizia Cantini on“Patrizia Cantini.it”, recalled the turning point that launched Artenova onto the international market.
Now, 11 years have gone by since Leonardo Parisi decided to convert the original production of Artenova to the production of amphorae for winemaking and to take the art of terracotta from Impruneta all over the world.
Read the full article here.

“Wine, Amphorae and the Sea”

Amphorae and wine are now a well-known combination in Italy and abroad. One of the main international producers of amphorae, and the only one in our country, is Artenova owned by Leonardo Parisi, located in Impruneta. The company was founded about thirty years ago and until 11 years ago the kiln produced classic artistic artefacts in terracotta.

However, Parisi immediately sensed the future of wine amphorae and converted the production. It was a happy intuition and today Artenova exports its amphorae as far as the United States and South Africa. These splendid wine vessels, which can reach a capacity of up to 800 litres, are produced entirely by hand, with local clay mixed with water. The process is a very long one: a month and a half to fabricate the amphora, then 2-3 weeks to dry after which it goes into the kiln for the necessary firing. Amphorae, as everyone knows, are the oldest wine containers and were used by the first producers to then reach the Greeks and Romans.

The particularity of terracotta is that it does not alter the organoleptic characteristics of the grapes used and therefore preserves their primary aromas. The technique is spreading more and more and in our country it was the Friulians who used it first. Today we can find amphorae in many wineries and one of the major supporters of this technology is Antonio Arrighi, a producer on the island of Elba, in his company of the same name in Porto Azzurro. Arrighi and Parisi have been collaborating for years now and the amphorae from Impruneta are the protagonists of what should have been only an experiment but which then turned into a real wine, produced every year if in an extremely limited number of bottles. Its name is Nesos, and its history is quite fascinating.

A few years ago the Italian Sommelier Association of the Island of Elba organized a conference to which it invited Professor Attilio Scienza, who decided to talk about the wines of Chios which were very popular in the Greek-Roman era. These were sweet wines, which were able to travel and were brought by ship to Marseille. The peculiarity of these wines was that the grapes were immersed in sea water before being vinified. The salt attacks the bloom that covers the grapes, making the successive sun-drying stage more rapid. It was for this that the Greeks invented this technique; in order to accelerate the drying times of the grapes for a greater extraction of aromas from the skins. Antonio Arrighi, present at the conference, was so fascinated by the story that he decided to try it, and in 2018 he obtained permission from the Port Authority to immerse grapes in small wicker pots to a depth of 10 metres for 5 days. Arrighi’s project was monitored by Scienza along with Angela Zinnai and Francesca Venturi from the Viticulture and Oenology course at the University of Pisa. Nesos, produced in only 40 bottles, was presented to the press in 2019, and I was lucky enough to be able to attend the presentation and taste the wine.

The media impact obtained by Nesos was so great as to encourage Arrighi to continue production and with the 2021 harvest the output should be around 300 bottles, which are sold for 200 euros each. The wine is produced using exclusively Ansonica grapes, which in consequence of the firstbexperiment, are immersed in the sea for only 3 days, because the salt attacks the bloom very quickly. Once recovered from the waters of Porto Azzurro, the grapes are not drained but are left to dry in the sun lying on mats. It is a short drying process and the result is a dry wine rather than a sweet wine like that of Chios. After drying, the grapes, deprived of their stalks, are pressed and then placed in Artenova Amphorae and are left with the skins until spring. The wine is then drawn off and regularly bottled.

A tasting of Arrigh’s wines vinified in part or entirely in amphora took place right in the Artenova workshop, and together with Nesos we were able to taste Valerius 2020, also a 100% Ansonicaproduced in 2000 bottles, with a nice fresh floral scent and a sapid and pleasantly acidulous palate. Hermia 2020 is instead a pure Viognier, for which Arrighi chose a long maceration of six months in 800-litre amphorae. A very fragrant wine, with penetrating hints of citrus and apricot, on the palate it is fresh and pleasant and absolutely adherent to the grape variety. V.I.P. is a Viogner in purity, but this time it is vinified in steel. It is then transferred to used barriques, which come from Burgundy, and were therefore previously used to make Chardonnay.

Then we tasted Tresse 2018, whose name refers to the three vines that compose it: Sangiovese, Syrah and Sagrantino (the name means Three Ss in Italian). The grapes are first vinified in steel and then transferred into amphorae without their skins. The three kinds of grape are vinified and refined separately and then joined together again in the amphora for another 18 months. Together with those of Arrighi the wine tasting presented other wines also produced in Artenova amphorae, among which it is worth noting Alberata 2019 from Tenuta Fontana di Pietrelcino, in the province of Benevento. Alberata is an Asprinio di Aversa, fermented and aged in amphora. The natural orange colour typical of the Asprinio vine accompanied a nose in which the warm notes of pear, hazelnut and peanuts dominated. Very pleasant in the mouth, with sour notes of mandarin, a real surprise.